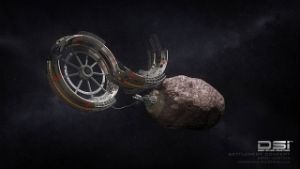 McLean, VA  February 15  Todays impact in Russia and the near miss by asteroid 2012 DA14 should shock the world into creating a sentry line of spacecraft circling the Earth to intercept and evaluate incoming threats, Deep Space Industries proposed.

The hundreds of people injured in northern Russia show its time to take action and no longer be passive about these threats, said Rick Tumlinson, chairman of Deep Space Industries.

Not all asteroids are the same, and to be ready to deflect one thats on a dangerous trajectory the world needs to know more about their structure and composition. Many may be solid but all photos so far have shown gravel and rock piles. A defense plan assuming the wrong type could make matters worse.

Placing ten of our small FireFly spacecraft into position to intercept close encounters would take four years and less than $100 million, said David Gump, CEO of Deep Space Industries. This will help the world develop the understanding needed to block later threats.